This year’s Fairtrade Fortnight might just have been our busiest yet – although we didn’t initially plan it that way!

We started with a stall at the Christian Aid lent Lunch  – lots of lovely baking and preserves.  Then we had our film night: 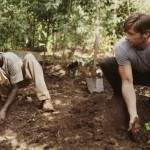 once again the Robert Burns Film Theatre helped us to source and screen a great film.  Dukale’s Dream  featured Hugh Jackman  as he and his wife visit Ethiopia and meet coffee farmers growing there – it’s well worth a watch. 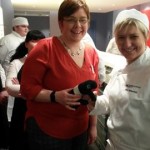 ay College – and of course Doonie came too.  It was a largely new audience for us and there was lots of lively discussion – and a delicious breakfast too.

But the biggest event for the fortnight was a  the decision by Greystone Rovers AFC to purchase lots (and lots) of Fairtrade Footballs from Bala Sport! We had lots of media coverage for this – let’s hope it inspires other teams and groups to do the same. 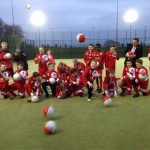 We finished off Fairtrade Fortnight with a breakfast for all our friends  and supporters – especially all those who have helped us out at events.  We borrowed the smoothie bike from Sustrans so that we could make smoothies with the new FAIRTRADE marked coconut milk from JTS .     It was a great way to finish a busy couple of weeks which also saw  a producer visit to the region and the winning pictures in our schools’ art competition on display at the Ewart Library. 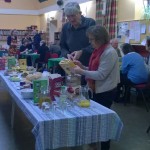