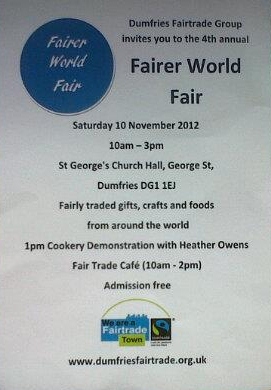 Cooking up the Fairer Flavours of Africa

A taste of Africa will be coming to Dumfries on Saturday November 10th.  Heather Owens, who runs the One Bank Street Bistro, will be preparing a range of dishes using fairly traded ingredients from Malawi and Swaziland.  The cookery demonstration will be part of the  Fairer World Fair, which will run from 10am – 3pm on Saturday  November 10th, at St George’s Church Hall.

The cookery demonstration  which will start at 1pm, will use ingredients from Just Trading Scotland’s  African Kitchen range, and the Cooperative , who have joined forces to inspire cooks to get the best out of their range of fairly traded ingredients, and create tasty African influenced dishes at home.

Organised by the Dumfries Fairtrade Group, the Fairer World Fair will also feature fairly traded crafts and foods from around the world, with stalls from Traidcraft, Oxfam, Created, the Galloway Eco-store, the Edinburgh One World Shop, as well as lots of information about Fairtrade, and the Fairtrade Cafe, with lots of delicious home-baking. Admission is free.

Sandra Watson, Chairperson of the Dumfries Fairtrade Group said, ” We will have a real African flavour at this year’s  Fairer World Fair, with these  wonderful dishes to try, and a range of fabric crafts from Groupement Takku Liggey, from Senegal, as well as a great range of products from around the world – it’s a good chance to do some Christmas shopping.

” The Co-operative and Just Training Scotland share  our strong support for fair trade, and this is a great opportunity for people in Dumfries to learn about how to get the most out of fairly traded products to make authentic African dishes, while helping producers in developing countries to find a market in Scotland and having some fun at the same time.”